S’Illot is a seaside holiday resort shared between the municipalities of Sant Llorenç des Cardassar and the town of Manacor, in the eastern part of the island of Mallorca. The natural border is the Torrent de Ca n’Amer that channels the waters from the area of Sant Llorenç, the Calicant Mountains and Son Carrió down to the sea.

S’Illot has a residential zone and holiday accommodation establishments. However, these were not the first buildings in the area. Right in the heart of S’Illot and just a short distance from the sea there is a large archaeological site, one of the most important in Mallorca, both in terms of its monumental diversity and its long historical evolution. The earliest elements date from 2200 BC and it existed as a settlement until at least the Romanisation of the 2nd century BC. It is well worth a visit and a recently opened Visitors Centre helps you interpret the day-to-day life of our ancient ancestors.

Strolling through S’Illot you can enjoy such sights as the bridge over the torrent, a small boatyard with llaüts (local leisure fishing boats) at the far southern end of the beach, and the views of a small island (in Catalan illot) from which the town takes its name.

The beach is the Platja de s’Illot. This is a tranquil area where you can watch people fishing from the rocks at dawn and dusk, and between the light and shadows of the sunset see children playing in the sand. The holiday accommodation is near the beach and there are plenty of shops and restaurants. The tourist train goes as far as S’Illot and the cycle lane runs from Sa Coma in the north to Porto Cristo in the municipality of Manacor.

The festivals of the patron saint of S’Illot are held at the end of August and culminate in a magnificent firework display that can be watched from the beach. 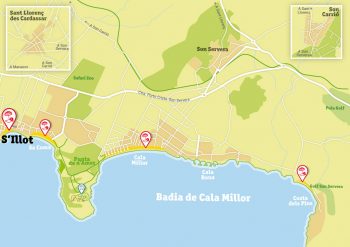 Around 10 August This is the area’s most eagerly awaited summer festival. It has something for everybody, although today’s festival bears little resemblance to that

This is a religious festival that begins with a floral offering to Our Lady, a religious service in the evening and at dusk a traditional