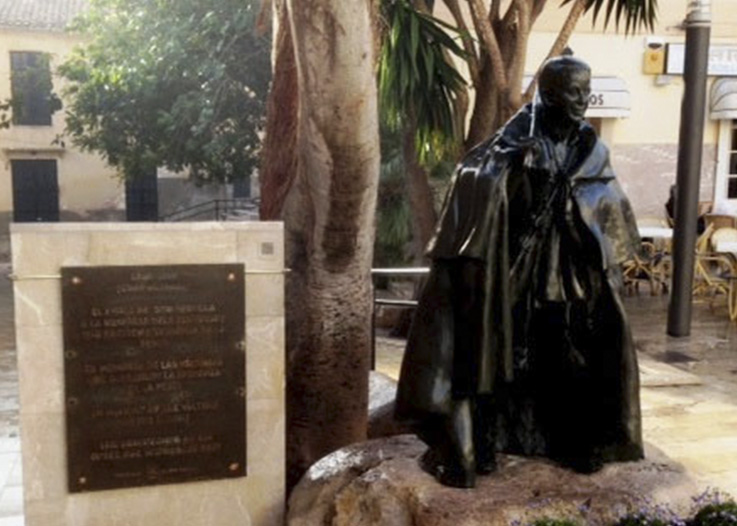 Sculpture to commemorate the plague epidemic of 1820 The story tells us that in the month of May 1820 a ship that had set sail from Tangiers moored off our coast to bury a member of its crew who had died in mysterious circumstances. They buried him in the sand on the beach and covered him with a cloak. The curse came about when a short time later a local man passed by and, seeing the cloak, picked it up and put it on to protect himself from the damp of the night. He died the next day and within a short time another 50 people were dead. Other sources point to different causes for the epidemic. Although the stories still involve a ship arriving in the bay, they tell of a resident of Son Servera who died in clinically unclear circumstances, closely followed by her husband and a neighbour. It is believed that the two men had worked on unloading the ship that had brought a cargo of wheat, as there was a shortage of the cereal due to a major drought in the county. The illness spread from there. However it arrived, the virulence of the outbreak obliged the town doctor, together with that of Artà, to recognise the epidemic and isolate the sick. At the beginning of June the Upper Health Board ordered a military cordon sanitaire to be set up around Son Servera, strictly forbidding anyone to cross it. The atmosphere in the town was desolate, as nobody dared come out into the streets. It was so devastating that 1040 of the 1808 inhabitants died. Only 768 survived and it is to them, through this sincere commemoration, that we express our gratitude for their efforts in rebuilding our town’s society. The agony and wretchedness lasted for three months until, little by little, by the end of August it seemed that everything was under control. In fact, there were no more deaths, although the quarantine was maintained for a long time as a precaution. On 5 June 1820 the mayor, councillors and the vicar decided to designate the day the cordon was lifted, 1 February, with an official feast day. Es Pastoret, the sculpture depicting a shepherd dressed in a cloak, by the local artist Eduardo Servera invokes mixed emotions: the joy of seeing the evolution of the town with its residents proud of being who and where they are and the emotion of remembering how our ancestors had the misfortune to suffer such a terrible illness.
Back to top
Go back